The Kenwood DNX573S is easily one of the most popular Kenwood navigation stereo on the market today! When Kenwood released this flagship device I had my doubts, as I do with 90% of the stereo out there in general. Specifications aren’t that important to me, I need to actually preform an installation and maneuver my way through the user interface in order to accurately get a feel for a stereo.

But, I decided that this touch screen stereo was worth a review, to say the least. One of my issues with Kenwood as a company in terms of touch screen stereos is the lag of the software and the over saturation of the screen colors. Kenwood implemented whats called the “Clear resistive touch panel” to shut me up!

I was amazed by the quality and the clarity of the screen, but I was still a bit on the fence with the software. So I launched the built in Garmin navigation (which usually lags on Kenwood stereos) and it was blazing fast. In terms of specs and sound quality, Kenwood has always been very good and the Kenwood DNX573S has stepped up in that department too. This unit has a number of smartphone options, the biggest one being Apple Car-Play. Apple car play is one of the biggest things to happen to car audio in the last few years. This feature allows you to connect your Apple Iphone 5 and up via the lightening cable to utilize the majority of your Iphones smart features.

These days bluetooth is pretty the same as it has been for the last 3 or 4 years. However, Kenwood added a few new features to the car stereo must have list. Dual Phone Pairing is among the most popular of the those features.

Dual Phone Pairing allows you to use two different smart phones seemingly at the same time. Kenwood now allows you to press a single button to switch between the two phones to allow you to access phone books, calls and music. The DNX573S hasn’t changed much in the audio department. The one thing they did change is the quality of the bluetooth and USB music playback, this isn’t something I can prove though. I just think this is one of the better sounding Kenwood stereos, for some reason it sounds noticeably better than a lot of other models out there.

whether you would like to build a high quality car audio system or you would like to just tweak the sound a bit, this is your guy! This stereo comes loaded with a 13 band equalizer, high pass and low pass filters, 4 volt RCA outputs, HD Radio, Time alignment and space enhancer.

These features alone make it pretty easy for guys like me to build a ridiculously clear audio system and trust that my stereo is feeding my amplifier crap for sound. Everybody in the car audio world knows that if you hook an amplifier to a low quality deck you will just get amplified distortion.

Good sound quality, expand-ability and options. The kenwood dnx573s is one of the best when it comes to those three determining factors. Whether you are a fan of high fidelity sound systems or your just simply a fan of integrating your smart phone with your radio you’ll genuinely love this radio.

I can also say that after installing this radio and hearing feedback from customers, this stereo is legit and worthy of of our 4AG five star rating. After you purchase, don’t forget to leave feedback! 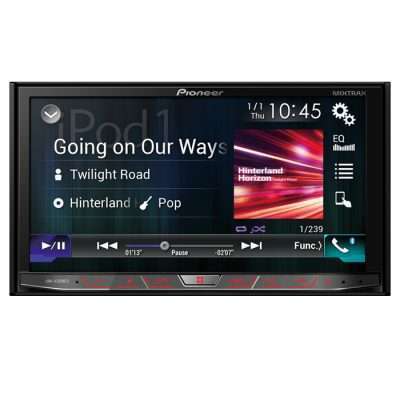 Entering or have already been in the premium car audio scene? Are you looking for a quality sound source (stereo)? or do […]

A car’s sound system is something we take for granted. A high-quality car stereo head unit gives you optimum control over your […] Alpine i207-WRA Review – Those who own a JK Wrangler Jeep would certainly find the Alpine i207-WRA digital multimedia receiver that brings smartphone connectivity to your 2007 to 2017 jeep.